The board of RSPCA Darwin Regional Branch Incorporated (RSPCA Darwin) is seeking applications for several skills-based directors who support the objectives and purposes of the association.
The Board includes a mix of elected and co-opted positions. The Board is seeking to co-opt four (4) skills-based directors as part of this process. Board membership is voluntary.
𝐃𝐢𝐫𝐞𝐜𝐭𝐨𝐫 𝐒𝐤𝐢𝐥𝐥𝐬
RSPCA Darwin is looking for several individuals with the skills and experience to effectively contribute to the strategic leadership and governance responsibilities of the Board.
The range of specific skills sought include:
• Finance
• Commercial or fundraising
• Governance or experience as not-for-profit secretary
• Veterinary, animal behaviour or animal care
𝐀𝐛𝐨𝐮𝐭 𝐑𝐒𝐏𝐂𝐀 𝐃𝐚𝐫𝐰𝐢𝐧
The RSPCA is Australia’s pre-eminent animal welfare organisation.
RSPCA Darwin, as a member of the federated national organisation, is an independent, locally-run charity; established in 1965 and celebrating 55 years of operations during 2020. RSPCA Darwin relies entirely on grants and fundraising to continue to do its work. With the support of our wonderful community, all the funds raised remain with the animals of the Northern Territory. RSPCA Darwin cares for over 750 animals each year who come to us through no fault of their own, whether lost, abandoned, neglected or worse.
RSPCA Darwin provides a strong voice for all animals, using scientific evidence to inform and advocate for long term improvements to animal welfare through legislation, by-laws and advice.
RSPCA Darwin operates on a well-maintained five-acre site in Berrimah, leased in perpetuity from the Northern Territory Government. RSPCA Darwin employs around 15 staff members in full and part time, as well as casual arrangements. The organisation is led by a very capable General Manager. The workplace is complemented by a large volunteer base who contribute approximately 8,000 hours per year.
RSPCA Darwin cares for predominantly puppies, dogs, kittens, cats and occasionally other animals such as pigs, ducks, chickens, rabbits and guinea pigs.
RSPCA Darwin’s Joint Patrons are Her Honour the Honourable Vicki O’Halloran AO, Administrator of the Northern Territory and Mr Craig O’Halloran.
𝐌𝐨𝐫𝐞 𝐈𝐧𝐟𝐨𝐫𝐦𝐚𝐭𝐢𝐨𝐧
To obtain an information pack and application form, please email secretary@rspcadarwin.org.au. Applications will close on Thursday 11th June 2020.
This job is Expired 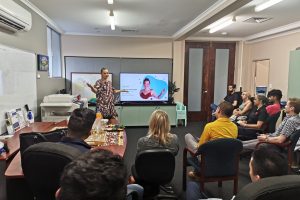